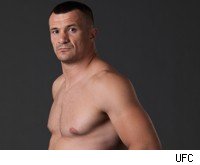 This is the UFC 110 live blog for Mirko Cro Cop vs. Anthony Perosh, a heavyweight bout on tonight's pay-per-view.

Cro Cop takes on a late replacement after Ben Rothwell was forced to withdraw due to an illness. Perosh is an Australian fighter with two unsuccessful appearances in the UFC.


More: UFC 110 Results | Mirko Cro Cop Beats Anthony Perosh by TKO
Cro Cop is wearing fight shorts instead of his usual tights. They are still red/white checkered, if you're wondering.

Round 1: Touch of gloves. Perosh comes out with a basic combo and he's backing away. Cro Cop looking to land the uppercut. Persosh shoots for the takedown. Cro Cop defending the single-leg. Cro Cop uses the guillotine to stop the takedown and bring Perosh to his knees. Cro Cop lets him up with 3:53 left in the round. Perosh backing. Cro Cop hits him with a left and Perosh is rocked. Perosh shoots nd Cro Cop defends. Perosh, who doesn't bother pretending to fight on the feet anymore, shoots. Cro Cop defends and pushes out of clinch. Perosh's face is bloodied. Perosh tries to pull guard with 2:11 left. Cro Cop lands a straight left and Perosh drops for the takedown. Perosh flops in an attempt for Cro Cop to go down with him, but it doesn't work. Perosh still looking lost on the feet. Cro Cop throws his first kick, landing a body kick. Cro Cop's straight left is working effecitvely. Perosh shoots and Cro Cop stuffs it. Perosh lays on his back and the crowd boos the hometown fighter.
MMA Fighting scores the round 10-9 for Cro Cop
Round 2: Cro Cop connects on an uppercut. Cro Cop sprawls and drops left punches. Cro Cop lands a body kick. Perosh lands a leg kick and a jab. Perosh shoots and Cro Cop sprawls on top. After landing punches and controlling Perosh on the ground, he lets him up. They clinch. Perosh lands an inside leg kick. I think everyone's wondering where Cro Cop's head kicks are? He's content with landing punches and stuffing takedowns. Cro Cop enters Perosh's guard with a minute left. Cro Cop lands a left elbow and opens up a nasty cut on Perosh's head. Referee Herb Dean calls on for the doctor. Dean is asking him if he wants to continue and Perosh doesn't seem like he wants to continue, but he agrees anyway. 47 seconds left. Perosh lands an inside leg kick. Crop Cop lands a hook and defends a takedown. Cro Cop pounds and Perosh turns in to survive the second.
MMA Fighting scores the round 10-9 for Cro Cop

The doctors stop the fight with Perosh on the stool.