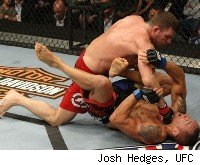 One never quite knows if a fighter is being truthful with his pre-fight comments. After all, he knows his opponent might read or see his words, and there is fear about tipping your hand. That's why most pre-fight chatter is quite generic and often bland.

Something Michael Bisping said recently has fallen under the radar, but it opens a lot of questions in regards to his mindset and strategy heading into his weekend bout with Wanderlei Silva.

Speaking to UFC.com, Bisping voiced a curiously timed hope about his fighting style that could foretell his UFC 110 performance.

"I want to start knocking opponents clean out in 2010," he said. "Stoppage wins and TKOs are all well and good, but I want to start racking up some one-punch finishes on my record."

The one-punch knockout is MMA's version of the home run. It is its most exciting moment, but it is nearly impossible to call your shot. What happens when many baseball players try to add power to their swing? They may hit more home runs, but they strike out a lot more, too. It exposes holes in their game because of the sacrifice of some control.

So what exactly does Bisping mean by his statement? Is he planning to throw caution to the wind and avoid his usual high-volume style in favor of heavy power punching? And if so, is that a game he should play with Silva, who most people can agree, has the much heavier hands of the two?

Silva, after all, made his name as a Muay Thai machine who often ignored defense in order to draw in his opponent and unleash a powerful wave of strikes. Bisping, meanwhile, historically has never been an easy target to hit. He favors a high-pressure approach that relies on his superior conditioning, accurate hands and good foot movement (the UFC 100 Dan Henderson KO loss aside). A shift to a more wide-open, brawling style would radically alter that, and against Silva, that could be a change for the worse.

Perhaps, though, Bisping has a whole other meaning with his comments, that he simply feels his power has improved over time and believes that will translate into more KOs in the future. That's an understandable hope; fighters love one-punch finishes the way baseball players love home runs. It just shouldn't be the focus of your approach.

Of course, the other possibility is that Bisping put the statement out there just to simmer in Silva's mind. Even a knockout artist like Silva has to exercise a certain level of caution against a different game plan than past performances would suggest.

If Bisping truly believes he's a power puncher and wants to test out his theory at UFC 110, he may unwittingly shift the match right to his opponent. Basically, the chances of him out-Silvaing Silva are not as good as the chances of him winning by being himself. Aggression and the finishing instinct is nearly ingrained in the Brazilian, and if Bisping trades his effective movement for stationary power, he puts the fight into Silva's world.

Nevertheless, his statement adds an interesting sub-plot to an already intriguing fight.