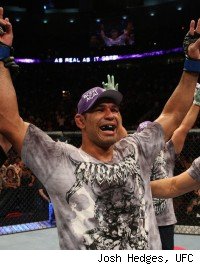 All 18 fighters comfortably made weight, passing the last hurdle before this weekend's UFC 110, which will actually be contested on Sunday morning in Sydney, Australia (10 pm ET, Saturday).

In the main event, rising heavyweight star Cain Velasquez will have a nine-pound advantage over the legendary Antonio Rodrigo Nogueira, weighing in at 242 to Nogueira's 233.

"It's going to be a tough fight tomorrow for sure," said Nogueira, who clearly had the crowd on his side. "He's a young guy, upcoming guy for sure and hungry. I've got a lot of experience to stop him and I'll be trying to use it all. It's going to be exciting."

"This fight right now in my career is everything," Velasquez said. "All the hard work in my career is paying off. I want to get better an better. Nogueira's always been at the top and that's where I want to be."

Middleweights Michael Bisping and Wanderlei Silva are the only two fighters who've exchanged trash talk before the fight, and not surprisingly, the two engaged in the most intense staredown of the night.

Immediately after weighing in at 185 (despite wearing a t-shirt and hat), Silva ripped off his shirt and marched over to Bisping, who had already weighed in, for the customary pre-fight staredown. Taking no chances, UFC President Dana White stepped in between them as they stood nose-to-nose. After a few briefs seconds, they broke, with Bisping clapping and Silva basking in the crowd's adulation, stretching his arms towards them.

The only other intriguing moment came just before Mirko Cro Cop emerged from behind the curtain. Earlier in the day, a Croatian website reported that Cro Cop had suffered a gash over his eye, but if he was cut, it was not easily visible. Cro Cop weighed in at 234 for his bout with late replacement Anthony Perosh.