UFC 110 Preview and Predictions on Nogueira vs. Velasquez, More 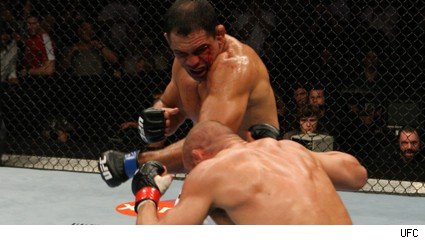 The UFC is heading to Australia for the first time this weekend for UFC 110, and we've got the full preview and predictions right here.

What: UFC 110: Nogueira vs. Velasquez

When: The non-televised undercard starts at 7:30PM ET Saturday (Sunday morning in Australia) and the pay-per-view card starts at 10PM ET.

Predictions on the five pay-per-view fights:
Antonio Rodrigo Nogueira vs. Cain Velasquez
The main event is a clash of experience vs. youth, with the battle-tested Nogueira taking on the 7-0 upstart Velasquez. Velasquez is bigger and stronger and represents the changing face of MMA in some ways, with his superior athletic background. But I believe the old guard is going to come out ahead in this one because I don't think Velasquez is quite ready to be tested on the ground by someone who practices Brazilian jiu jitsu at Nogueira's level.
Pick: Nogueira

Wanderlei SIlva vs. Michael Bisping
This is another match-up featuring a Brazilian legend taking on a younger, less experienced opponent, although the gap in experience between Silva and Bisping isn't quite as big as that between Nogueira and Velasquez. Silva is a horrendous 1-5 in his last six fights, but all six of those opponents were better than Bisping. If Silva loses this bout you'd have to say he's officially finished as a high-level mixed martial artist, and if he gets knocked out -- as he did in four of those five losses -- you'd have to say he should consider retiring for his own health. But I still believe Silva has a great performance left in him, and I think we'll see that great performance against Bisping.
Pick: Silva

Joe Stevenson vs. George Sotiropoulos
Sotiropoulos is the only Australian on the pay-per-view card, so he'll be a huge fan favorite. Sotiropoulos has won all four of his UFC fights and has finished them all, but he hasn't faced anyone nearly as good as Stevenson, who should win this fight decisively.
Pick: Stevenson

Keith Jardine vs. Ryan Bader
Jardine has an awkward style that makes him a big match-up problem for anyone, and he's a big step up in competition for Bader. But I think Bader, the former Ultimate Fighter winner, is one of the best light heavyweight prospects in the sport and will use his superior strength and his wrestling base to take Jardine down and beat him on the ground.
Pick: Bader

Mirko Cro Cop vs. Anthony Perosh
Fedor Emelianenko and Kenny Florian made some interesting comments recently about how Cro Cop has lost his competitive fire, and I think they have a good point. But Cro Cop is so much more advanced in his striking than Perosh (who took the fight on two days' notice after Ben Rothwell dropped out with an illness) that Cro Cop should get an easy TKO win.
Pick: Cro Cop