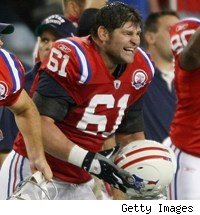 Neal, a longtime offensive lineman for the New England Patriots, is a free agent. And according to CSN New England, his agent Neil Cornrich says Neal is considering a variety of possibilities for his future, including fighting.

"He's excited to continue in the NFL and perhaps after that take a chance at the UFC," Cornrich said. "Getting back involved in Olympic-style wrestling is definitely a consideration." Neal has a very decorated past as an amateur wrestler, compiling a 151-10 record and two national championships while competing at Cal State-Bakersfield. In 1999, he capped his collegiate career by defeating current UFC heavyweight champion Brock Lesnar in the heavyweight finals, then winning the Dan Hodge Award, considered the Heisman Trophy of college wrestling.

Despite not playing football since high school, Neal made the Patriots roster in 2001 and has played in 78 games in his career, winning three Super Bowls.

At 33 years old, however, he would face long odds in making it to the UFC. He's suffered a host of injuries problems in his football career including shoulder surgery and a concussion in 2009.