Bellator to Return to Chicago on April 15 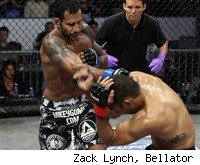 Bellator will make at least one stop in Chicago this year on April 15 at the Chicago Theatre, MMA Fighting has learned.

The Chicago Theatre is in the actual downtown of Chicago and hosted the UFC 90 weigh-ins when the UFC came to Rosemont in October 2008. It is likely that more Chicago dates will be scheduled.

Below is the current schedule for Bellator season two and three.