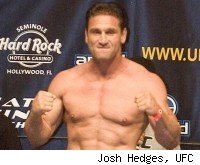 Ken Shamrock took a loss in the legal system from his former employer when a judge ruled against the MMA legend in his contract squabble with the Las Vegas-based UFC.

In a suit filed in April 2008 in Nevada's Eighth Judicial District Court, Shamrock claimed the company violated contract provisions of his deal and, according to the UFC demanded "hundreds of thousands of dollars" in compensation he claimed he was owed as a result.

The court, however, ruled in a 16-page decision that the contract was not breached.

"Zuffa has issued a clear directive that we are to pursue every legal remedy to ensure that the UFC's contracts are scrupulously honored and defended," UFC trial counselors Donald J. Campbell and J. Colby Williams said in a statement. "The resulting judgment in this case is just one more example of the UFC's resolve to vigorously vindicate its contractual rights in the courts."

The original complaint was based on Shamrock's deal with the UFC, reached just before the finish of a three-fight trilogy with Tito Ortiz in Oct. 2006. Under the terms of the deal, Shamrock was promised two fights unless he chose to retire after the first. Facing Ortiz, Shamrock suffered a first-round TKO loss, and seemingly retired in the octagon following the match. But after deciding to continue on with his career, the UFC claimed it no longer had to honor the deal since he had called it quits, thereby nullifying the terms of the contract.

In addition to the ruling, the press release noted that the UFC would file a motion against Shamrock seeking recovery of attorney fees incurred in the defense.

He resumed his fighting career in 2008, and was expected to face Seth Petruzelli in March in Cancun, Mexico. While that event has run into roadblocks and appears unlikely to happen, rumors suggest that the two may square off in May, possibly in Miami.