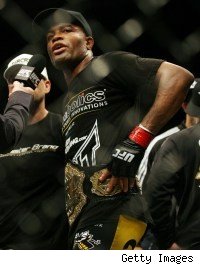 In the wake of Vitor Belfort's shoulder injury, UFC President Dana White and matchmaker Joe Silva were left with a decision regarding the status of middleweight champion Anderson Silva. They could pull him off the UFC 112 card, move him up to fight a non-title light-heavyweight bout or find another contender to replace Belfort.

After handling Nate Marquardt at UFC 109, Sonnen was seen as the most deserving candidate.

"Obviously the guy who should get that shot right now is Chael, but he just came out of a really tough fight. He's busted up," White said.

Crossing him off the list, it was down to three. While Bisping or Silva might have been seen as more attractive style matchups for Silva, the timing wasn't quite right. From the close of their UFC 110 matchup to the time they'd have to step into the cage to face Silva would be only seven weeks. That's shorter than an average training camp, and it would have to encompass time for recovery from their bout, scouting and preparing for Silva, and another weight cut.

"It was too tight," White said.

He, too, had fought on the same card as Sonnen and also suffered an injury, a laceration on his left eyelid. Maia was sent to see the UFC's top cut doctor, and it was determined he would be cleared to fight by April 10.

Maia was suddenly at the front of the line.

"Listen, opportunities pop up for people, you know?" White said. "I like guys who jump and take the opportunity. You'd be surprised how many guys don't."

As for what kind of matchup Maia -- who clearly favors grappling and submission to standup -- can give the feared striker Silva, that's a whole other question. White, however, is hoping for the best.

"I can't worry about that going into a fight," he said. "I can't see that and try to make a fight for Abu Dhabi and think, 'God, I hope he doesn't fight like Thales Leites did. I think that Demian Maia is a very talented guy. He's one of the best fighters in his weight class, and I think he wants to win this title. Obviously what happened to him in the Marquardt fight he was not happy about. And I think he wants to come out and put on the best performance he can."