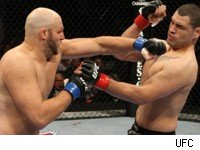 Ben Rothwell and Elvis Sinosic will not compete on this Saturday's UFC 110 card in Sydney, Australia, the promotion revealed Thursday evening.

Rothwell has been sidelined by an undisclosed illness and will be unavailable to fight Mirko Cro Cop. In for Rothwell is Australian fighter Anthony Perosh.

Meanwhile, Sinosic has pulled out due to a shoulder injury and his light heavyweight bout against fellow countryman Chris Haseman has been canceled.

Perosh (10-5) is a two-time UFC competitor who lost in 2006 to Jeff Monson and Christian Wellisch at UFC 61 and 66, respectively. After the losses, he fought solely in Australia. Together with Sinosic, Perosh co-founded two Sinosic Perosh Martial Arts academies together in Australia.

While Sinosic-Haseman would have had zero impact on the UFC's 205-pound division, it was a fight between two Australian MMA pioneers that has generated buzz for the local crowd.