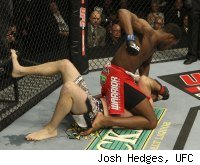 In an effort to get a 360-degree view of mixed martial arts, sometimes you have to look at numbers. MMA isn't a stat-heavy sport, which is good or bad depending on your opinion. Sometimes, they're just unnecessary. A one-punch knockout, after all, is its own statement.

But what about the statement that numbers can make? One thing I think most MMA fans would be interested to read is the most common methods for finishing fights. Is it knockouts? Submissions? Decisions?

MMAFighting looked at UFC stats dating back to UFC 100 in July. That covers 130 fights over 12 events, or roughly 10 percent of all fights in the company's history.

According to the numbers, UFC fights these days are most likely to go to the judges' scorecards. Sixty of the 130 bouts did so, with 41 unanimous decisions, 16 split decisions, one majority decision and two draws.

Submissions closed out 28 of the bouts (21.5 percent), while there was only one disqualification.

The interesting thing to note is the trend of more fights going the distance. Dating back to UFC 1, only 30.9 percent of all UFC fights in the organization's history have gone to a decision (a number somewhat skewed by the fact that early matches had no judges and were fought until a winner emerged). But during the recent 12-event stretch examined by MMAFighting, over 46 percent of match outcomes were decided by the judges.

According to Sherdog.com's historical stat archives, only 17 percent of all fights in MMA history have ended via decision. While UFC has always had a slightly higher rate of decisions, the rise to nearly half of all matches is alarming.

The trend of going the distance makes it all the more crucial that athletic commissions be proactive in selecting judges with an open mind towards continuing education and betterment of their craft.

As the sport grows larger and opportunities increase, there is simply too much at stake for fighters to suffer at the hands of inexperienced judges not capable of being fair and objective under pressure.