Fighting in Australia, UFC 110 Will Be Elvis Sinosic's 'Biggest Fight' 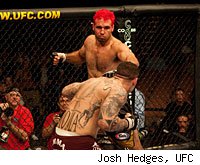 The biggest fight of Elvis Sinosic's career wasn't when he challenged then-champion Tito Ortiz for the UFC light heavyweight title at UFC 30. In his opinion, the most important one for him will be his fight against Chris Haseman this Saturday at UFC 110.

After all, it's the UFC's first trip to Australia and the only fight in the promotion's 17-year history to feature two Australians. With a record of 8-11-2 and six straight UFC losses, there's no question he's only on the card for the local fans, and at 39, he'll never contend for a world title again. However, he's still one of the most recognizable fighters out of Australia and feels he can add one last highlight to his resume.

"This is it. The last chance I will get," Sinosic said. "The biggest fight of my life. UFC in my own town."

Sinosic was one of the Zuffa-era UFC's first featured fighters and appeared on the first UFC show under Zuffa at UFC 30 on Feb. 23, 2001. He was "The King of Rock n Rumble," and 2001 was also the high point of his career. Making his UFC debut at UFC 30, Sinosic submitted Jeremy Horn to earn a light heavyweight title shot and would main event UFC 32 with Ortiz. But ever since losing to Ortiz, Sinosic has never gone above .500 again.

"I know I am a little lucky to get this shot at coming back to the UFC, and know it is because they show is in Sydney," Sinosic said. "But I intend to make the most of it, win in great style and go on from there."

"We are probably the two guys who made a name for ourselves the most in MMA Down Under," Sinosic said. "I fought in the UFC more, fought for a world title and have fought some good guys but he has fought Fedor and those guys. We both represented Aussie MMA well back when no one really knew the sport."

Sinosic would lose the bareknuckle fight by submission, tapping to a chin to the eye.

"He was a good wrestler even back then," he said. "He was on top of me in side mount and used his chin to my eye. The pain was awful and I thought he could blind me. The tactic was not outlawed back then and I tapped. The result is the result. But this time at UFC 110 it is a MMA fight and the result will be different."

Although he's fighting in his hometown, Sinosic's training camp hasn't been in the comfort of his own home. For this fight, Sinosic has worked with Shawn Tompkins at the TapouT Training Center in Las Vegas, Carlos Machado's Academy in Dallas and Tiger Muay Thai in Phuket, Thailand. Aware of what's at stake, Sinosic is pulling out all the stops for what may be the final UFC fight of his career.

"I've spent a fortune on this camp, I've been away from home before Christmas and lived out of a suitcase," Sinosic said. "I've lived like a nomad in preparation for a fight in an arena less than 20 minutes from my front door."

Fighting since 1997, Sinosic has witnessed the growth of MMA and he's honored to fight a fellow pioneer in UFC's first show in Australia. Much has changed since in the sport and the fighters.

"We are both closer to the end of our careers than we are to the start. Both vastly different fighters to the two guys who fought 13 years ago," Sinosic said.

"We're vastly different fighters now, and the result will be different. I've not been living out of a suitcase for nothing."