Chances of MMA in Toronto Suffer Blow From Ontario Premier 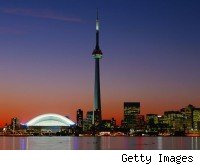 It may be one of the UFC's target destinations, but holding an event in Toronto may be farther off than it once seemed.

Ontario Premier Dalton McGuinty told reporters on Wednesday that legalization and regulation of mixed martial arts in the province was not imminent.

"It's just not a priority for us right now," he said. "We have other things on the go right now and we'll stay focused on those."
The federal criminal code prohibits "prizefighting" but provinces can exempt sport such as boxing and MMA. Late last year, Vancouver passed a two-year testing period, paving the way for major MMA events. The UFC expects to hold an event there in June. The UFC has also held successful events in Montreal. Other promotions have held events in major cities such as Edmonton.

As recently as Dec. 2009, it seemed as though MMA had a strong chance of legalization in Ontario, after McGuinty told reporters he had "an open mind to those kind of things." He promised a thoughtful approach to the situation, but now it appears MMA regulation is no closer to being a reality.

Toronto has long been considered an MMA hotbed despite its inability to host events. According to the UFC, Toronto is its top pay-per-view market in North America.

"When we look at our TV ratings and our pay-per-view buys, on a per-capita basis, Toronto and Ontario are the No. 1 places in the world," UFC executive Marc Ratner told The Toronto Sun recently.

The UFC put a full-court press on the province, hiring lobbyists and releasing a study that claimed an event in Toronto could generate up to $4 million in tax revenue for the city. The organization hoped that the facts-and-figures blitz would lead to regulation, leading to an event in late 2010 that could draw upwards of 40,000 fans to The Rogers Centre.