Ben Rothwell on Cro Cop: 'The Pit Bull Has Still Got Some Bite' 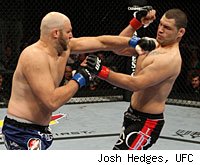 Ben Rothwell had 36 professional mixed martial arts fights before he finally got a shot in the UFC in October. It didn't go well.

Rothwell was beaten badly in his Octagon debut against Cain Velasquez at UFC 104, dropping his pro record to 30-7, and he says that loss led him to change the way he approaches his sport.

"My training for this fight has changed, of course, following the October match with Cain Velasquez," Rothwell told MMAFighting.com. "I made a decision to pack my things up in Iowa and move back to Wisconsin. I moved my life back there and decided to train full-time with Duke Roufus. He's been a long-time part-time coach for me since 2003, but I've decided to move back to Wisconsin and have him be my full-time coach. There is a great team down there with lots of energy and excitement and it's been really good for me and my preparation for this fight. I wasn't getting everything I needed in Iowa and just felt I needed a change. "

Rothwell will return to the Octagon on Saturday in Australia when he fights Mirko "Cro Cop" Filipovic at UFC 110, and he says he's heading into that fight with a better attitude -- and with better training. In that respect, he thinks the loss to Velasquez will prove helpful.

"I have seven pro losses now and they've all affected me the same way," Rothwell said. "I wouldn't say they made me depressed, but each one of them made me realize I did something wrong and that I had to do something about it. I just try to learn from each defeat. There's no point sitting there and feeling sorry for yourself – that's not going to make you better. I just try to bounce back as quickly and strongly as I can."

At this stage in their respective careers, Rothwell is likely to have an easier time in the Octagon against Cro Cop (who's 35 years old and past his prime) than he did with Velasquez (who's 27 years old and just entering his prime). But Rothwell acknowledges that there's a certain mystique about Cro Cop. In fact, Rothwell says he's idolized Cro Cop for years.

"He's a legend and he's been fighting for a long time," Rothwell said. "I used to watch him as far back as 2000, and even watched footage of him in his K-1 days before I started fighting myself. This is a serious fight and he's a serious fighter. I had to do everything I could to give me the best possible chance of winning this fight. My training has picked up, I've moved myself to a new state and I believe I've given myself a great chance of winning the fight."

But while Cro Cop is just 3-3 in the last three years, Rothwell says he's not treating Cro Cop like a .500 fighter.

"One mistake guys could make in my position is that they go into a fight like this underestimating Cro Cop," Rothwell said. "They could be thinking that he's no good anymore or that he's finished. First of all, you've got to just look at the fighters that Cro Cop has lost to, in order to see that it's stupid to write him off. He hasn't been losing to chumps. He's been losing to good fighters. Maybe people don't realize how good Junior Dos Santos or Gabriel Gonzaga are. Also, when you've got everybody in the world telling you that you're done and can't fight anymore, yet you still want to carry on and prove them wrong – that's saying something. That shows me that Cro Cop's coming to fight and that he's got a lot of fight left in him.

Rothwell is going into this fight thinking he'll face the Cro Cop who was among the best mixed martial artists in the world during his days in Pride.

"It would be a massive mistake to take him lightly," Rothwell said. "I believe the pit bull has still got some bite left in him."

Rothwell said he's prepared so well for this fight that he doesn't need a specific game plan -- he's going to be ready no matter what happens when the cage door closes.

"There's nothing really to say about how the fight goes," Rothwell said. "This is the reason we fight the fights, to see what happens on the night. I have game plans, things I have trained for, but I am prepared for anything."