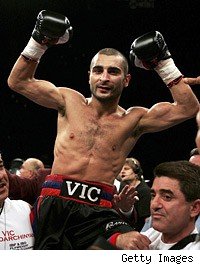 The Armenian-born fighter told Australia's Daily Telegraph that he hopes to try the sport within one or two years.

"At the right time, I want to have a go at a cage fight," he said. "I've done wrestling since I was very young, so I believe it's something I could compete at if I wanted to."

Darchinyan might very well be the most qualified of any boxer who's talked about transitioning to MMA. His father was an Olympic wrestling coach for Armenia and he reportedly grew up wrestling.

Other boxers who have talked about trying or have tried MMA include Ray Mercer, James Toney, Ricardo Mayorga, Hasim Rahman and Shannon Briggs.

There are indications Darchinyan is serious about the endeavor. The Daily Telegraph article notes that he has already spent time training with UFC fighter James Te Huna, a New Zealander by birth who now trains in Darchinyan's current home country of Australia. Te Huna is making his octagon debut at Saturday's UFC 110 against Igor Pokrajac.

With a ring record of 33-2-1, Darchinyan -- who turned 34 last month -- has won titles in two weight classes. Don't expect to see Darchinyan in the UFC, however. He's spent most of his time in boxing's lowest weight divisions, competing as a super flyweight with a maximum weight of 115 pounds.

The WEC has long discussed adding a flyweight (125 pounds and under) division, which would seem a more likely fit should Darchinyan follow through with his plan and seek out a U.S. based organization.