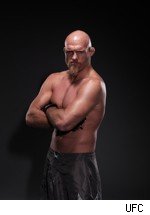 When browsing Keith Jardine's most recent five assignments (Thiago Silva, Wanderlei Silva, Brandon Vera, Quinton "Rampage" Jackson and Chuck Liddell), it's safe to say the Greg Jackson product is not one to turn down a challenge. So when he was offered a fight at UFC 110 in Australia against The Ultimate Fighter 8 winner Ryan Bader, there was no way he would decline.

But first, who's Ryan Bader?

"I didn't even know who Ryan Bader was when he was first mentioned to me by the UFC," Jardine said. "It took me a little while to realize who they wanted me to fight. All I heard was that they wanted me to appear in Australia and that was all I needed to hear. That was all my incentive right there. It didn't matter who was in the other corner facing me."


More Coverage: Is UFC 110 a Must-Win Match for Keith Jardine?


Invested in the belief to ever improve and not let the sport pass him by, the 34-year-old Jardine says he's been training nonstop for five months ever since the 95-second TKO loss to Thiago Silva last August at UFC 102

"I haven't necessarily had separate camps, but one long training period," Jardine said. "I was straight back in the gym after the Thiago Silva fight and I've been there ever since."

Jardine says every loss opens his eyes and forces him to evaluate what was working and what wasn't working in his game. Known for striking at odd angles, an adjustment Jardine recently made was to restore his unpredictability.

"I'm always called unorthodox by people and, to be honest, I didn't even know I was all that unorthodox until people started saying it to me," Jardine said. "I've actually started straying from that kind of style in recent times and have tried to clean my style up a little bit too much. In hindsight, I think that's actually hurt me in some ways. I tried fixing some things that weren't actually broken and it really didn't suit me. I lost parts of what I did naturally."

Posing the threat of a third consecutive loss for Jardine is Bader, a former Arizona State University All-American wrestler with a work-in-progress standup game.

"He's a great wrestler, but he likes to stand up and box," Jardine says. "I give him credit for that. He's pretty one-dimensional on the whole, but he's pretty good at the one dimension he has."

Although Bader is proficient in wrestling, Jardine doesn't expect Bader to rely on his bread and butter.

"I definitely see Bader trying to stand up and fight. I don't know for sure, but I can see him trying to prove a point by standing with me," Jardine said. "I don't expect to see him do much wrestling at all. I would absolutely love for him to stand and fight with me. That's the perfect fight for me."

After winning the TUF 8 title against Vinny Magalhaes by TKO, Bader extended his unbeaten record to 10-0 with decisions against Carmelo Marrero and Eric "Red" Schafer. If Bader's pattern of three-round fights continue, Jardine believes that will play to his advantage. Jardine says the longer a fight goes, the more his confidence grows.

"Sometimes it's great to finish quick and get out of there, but I usually do my best work in the longer fights," Jardine says. "If you actually look at my career, all my best performances seem to come in the longer, more grueling fights. They're the kind of fights I look forward to."

Jardine represents the biggest test of the 26-year-old Bader's career thus far -- not that Jardine is going to treat him any differently than he would if he were to fight the 205-pound contenders he's been accustomed to facing.

"He's undefeated and unproven and so we don't really know how good he is or how good he's going to be. For all we know he could end up being as good as some of the great fighters I've fought," Jardine said. "I don't think so – but we don't know for sure yet. We're just waiting to find out about him. As far as I'm concerned, I'm just going to go there and fight my fight. I don't have any points to prove. I'm not overlooking him at all and know that I'll need to be at my best."