Hector Lombard Will Fight in Australia in March, Bellator in May 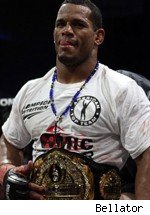 Bellator and Cage Fighting Championship middleweight champion Hector Lombard will have one more fight with the CFC before he returns to Bellator.

Lombard is set to make a CFC title defense against Art Santore at CFC 12 on March 12 in the eastern suburbs of Sydney, Australia.

MMA Fighting has learned that Lombard received the green light from Bellator to fight for the CFC and that Lombard will be back with Bellator in May for a superfight. After, the plan remains to defend his Bellator title against the Bellator season two middleweight winner in September.
Lombard (23-2-1) is continuing his heavy workload from 2009, where he competed in five fights. Lombard fought earlier this month, defeating one-time Bellator fighter Joey Gorczynski by unanimous decision at G-Force Fights 3 in Miami, Fla. Barring any injury setbacks, Lombard will have have four fights this year by September.

Santore (18-7) of Team Quest fights mostly in the Southwest. He has fought two of three of the middleweights announced so far for Bellator season two. Santore is coming off a loss to Bryan Baker at last December's Maximum Fighting Championship 23 and has lost to Eric Schambari at WEC 27.