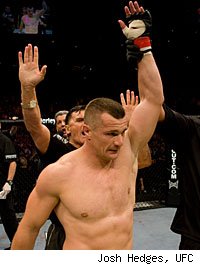 The last time Mirko Cro Cop stepped into the Octagon, he was so dispirited by the way the younger, bigger and stronger Junior dos Santos that he quit in the third round and sounded afterward like a man who was ready to quit fighting for good.

But Cro Cop didn't become one of the greatest heavyweights in mixed martial arts history by quitting when things got tough. And as Cro Cop prepares for his return to MMA against Ben Rothwell at UFC 110, he says the hard work he's put in with new sparring partners and a revamped training program over the last few months is going to pay major dividends.

"To be a successful fighter now you have to go to a camp," Cro Cop said. "For all my career I (was) training at home, sparring with friends who were there to help me as a friend, doing me a favor. There were not A-class fighters. It was a mistake of mine to train like that, with friends, at home. It was a handicap I should not have given myself. In Croatia, we do not have big camps like in other countries, but I was not willing to go away to train."

But that all changed once Cro Cop began to consider how he should react to his loss to dos Santos. He decided to push himself by practicing against some of the best strikers in the world, and he said his only regret is that he didn't do it a lot sooner.

"Now, I am making myself do this," Cro Cop said. "I wish I had done this a long time ago. I went to Holland to train with K-1 fighters for over a month for this fight. It was very hard, very new to me. Now I am training with sparring partners who are nice people, sure, but not my friends. These are sparring partners who want to knock me out in sparring. In the Croatian media they said it was 'life and death' sparring -- it was not quite life and death, but it was all out fighting, very hard. For every round, I had A-class fighters trying to knock me out."

Cro Cop, who at 6-foot-2 and 226 pounds is one of the smaller fighters in the UFC's heavyweight division, said Rothwell's size (6-foot-4, 265 pounds) is a concern. But not so much of a concern that Cro Cop lacks any confidence in his ability to win.

"He is a big guy, much bigger and taller than I am," Cro Cop said. "He is very tough as well. But I am ready. He is very good with ground and pound, but I am not worried about this. I am ready if it goes to the ground. But I do not think it will go to the ground. I think this will be a stand-up battle, the Fight of the Night."

Cro Cop is 35 years old, and has looked mediocre at best in his five UFC fights, but he believes that he's still a relevant part of the UFC's heavyweight division -- and that he may have some big fights in him in 2010.