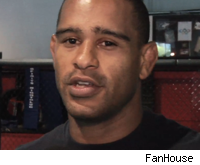 Jorge Santiago admits that he didn't take Mamed Khalidov seriously enough when they fought in November, and as a result, Santiago lost for the first time in 10 fights. Luckily for Santiago, though, his Sengoku middleweight title wasn't on the line, but it will be on March 7, when they'll meet at World Victory Road's Sengoku Raiden Championships 12.

MMA Fighting recently spoke to Santiago at the American Top Team gym in Coconut Creek, Fla., about what went wrong against Khalidov in their first meeting, what he is doing to prepare for him this time around and whether he feels he receives enough recognition in the North American MMA community. Watch the video interview below.