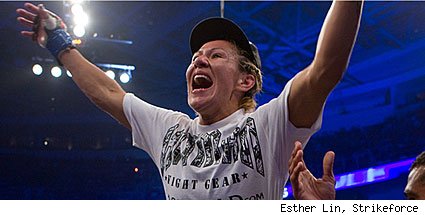 The last time I posted rankings of the Top 10 pound-for-pound fighters in women's MMA, I noted how hard it is to identify the truly elite female fighters in the sport, and I asked MMAFighting.com readers for their input.

I got a lot of good suggestions of good fighters after that, and I've seen a lot of good women's fights since then, including Cris Cyborg vs. Marloes Coenen in person and a whole bunch of fights on YouTube. After all that, I think I have a much-improved list of the Top 10 pound-for-pound fighters in women's MMA below.

(Editor's note: The previous individual fighter's ranking for women are in parentheses)

1. Cris Cyborg (1): After her handling of Gina Carano and Marloes Coenen, I don't think there's much question that she's the top dog in women's MMA at the moment. The only question is whether Strikeforce can find worthy challengers for her.

2. Tara Larosa (2): Once widely regarded as the sport's best, Larosa was mostly ignored while going 3-0 while fighting on Extreme Challenge cards in 2009.

5. Erin Toughill (8): She'll get the unenviable task of fighting Cyborg next, most likely some time this summer.

6. Miku Matsumoto (5): She's on a 12-fight winning streak, and only two of those fights went the distance.

7. Mei " V Hajime" Yamaguchi (NR): Just choked out one of the sport's pioneers, Yuka Tsuji, in 76 seconds, handing Tsuji only the second loss of her career.

8. Marloes Coenen (6): There's no shame in losing to Cyborg, and I was impressed with her tenacity even as she was beaten up by a better opponent.

9. Takayo Hashi (NR): Her fight with Kaufman is the biggest women's fight on the MMA schedule.

10. Gina Carano (10): This was a tough one. Most of the feedback I got in my previous rankings came from people who thought Carano had no business in the Top 10 because she's not really committed to fighting. And I also heard that I had snubbed Rosi Sexton by leaving her off my last list. Maybe. But considering that Carano knocked Sexton out when they fought in 2006 -- and considering that Carano's only loss is to Cyborg -- I'm keeping Carano in my Top 10. For now.