If Maia Beats Silva, MMA Middleweight Division Is a Mess 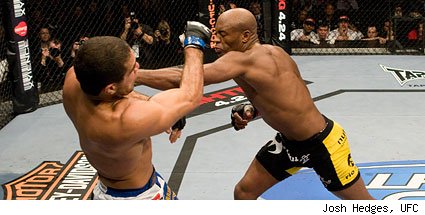 Since Anderson Silva knocked out Rich Franklin at UFC 64 in 2006, there's been an undisputed king of the middleweight division in mixed martial arts. The rankings of the best middleweights in the sport have seen their share of shakeups, but no one doubted that the UFC middleweight champion was at the top of the heap.

It's also been generally understood since then that if any middleweight could beat Silva, that man would be at the top of the middleweight rankings. Sure, Patrick Cote and Thales Leites were relatively weak opponents who didn't seriously threaten Silva, but Cote and Leites were each on five-fight winning streaks when they fought Silva. There's something fundamentally different about Silva's newest opponent, Demian Maia.

Crazy as it is to say, by the end of April we might be looking at a situation where the upcoming fight between Dan Henderson and Jake Shields determines not just the Strikeforce middleweight title, but the title of best middleweight in all of MMA. If Maia beats Silva, that throne is ripe for the picking.

Overall, the middleweight division would be a mess if Maia beat Silva. But it's probably safe to say that's not going to happen.