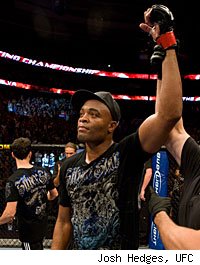 Anderson Silva will not fight Vitor Belfort at UFC 112, and he won't fight Chael Sonnen either. And yet UFC President Dana White says Silva -- the middleweight champion who's widely regarded as the UFC's best pound-for-pound fighter -- will remain on the April 10 card.

So who is Silva fighting? We offer some odds below.

Yoshihiro Akiyama: 3-1
Akiyama is one of the most popular fighters in Japan, where the UFC wants to expand its brand. He's coming off a Fight of the Night-winning performance at UFC 100 in his UFC debut. He's a credible middleweight challenger. And he doesn't currently have a fight scheduled. White says he wants Silva to fight at middleweight at UFC 112, and Akiyama would seem to be the best choice.

Michael Bisping-Wanderlei Silva winner: 5-1
These two will fight at UFC 110 on February 20, and the UFC would love to promote either Bisping vs. Silva or Silva vs. Silva. The biggest problem is the timing: Is seven weeks really enough time for the winner to recover from one fight and then get ready for another? White may be hoping for a first-round knockout when Bisping and Silva step into the Octagon so that the winner can turn around quickly, but it's a stretch to think it could happen.

Alan Belcher: 8-1
Belcher is coming off an impressive win over Wilson Gouveia at UFC 107, and the UFC could take him out of his scheduled UFC 114 fight with Patrick Cote to take a title shot. But will fans really buy Belcher as a credible challenger to Silva?

Randy Couture: 10-1
Replacing Belfort with Couture is the one fight the UFC could make that would guarantee an increase in pay-per-view buys. But Couture has always believed in taking the time to prepare properly for his fights, and it's hard to seehim agreeing to travel halfway around the world to fight Silva on eight weeks' notice.

Keith Jardine-Ryan Bader winner: 15-1
Other than Couture, there really aren't any good light heavyweight options for Silva, because the top fighters in the light heavyweight division are already penciled in for fights against each other, with Lyoto Machidavs. Shogun Rua and Rampage Jackson vs. Rashad Evans in May. But maybe Jardine and Bader, who fight each other at UFC 110, can produce the kind of fight that will have fans salivating to see the winner face a step up in competition -- which Silva would surely represent. It seems farfetched, but it's possible.

Yushin Okami: 25-1
He was the last guy to beat Silva (by disqualification), so that makes Okami vs. Silva a fight with an easy storyline to sell. Realistically, though the UFC has spent the last couple of years burying Okami on its cards. If it wanted to put Okami in big fights, it would have done so by now.

Demian Maia: 30-1
If he were healthy he'd be a decent choice, a Top 10 middleweight with a ground game that could threaten Silva. But Maia suffered a bad cut in his UFC 109 win over Dan Miller, so he probably can't be ready by April 10.

Mirko Cro Cop: 50-1
If Cro Cop beats Ben Rothwell at UFC 110, it's not inconceivable that the UFC could move Silva all the way up to heavyweight to fight him. Not inconceivable, but not very likely, either.

Todd Duffee: 75-1
OK, now we're just reaching, but Silva has suggested that he'd love to test himself against a much bigger opponent, and the 250-pound Duffee would certainly qualify. Duffee is also coming off a UFC record seven-second knockout in his last fight, which makes for an interesting angle that the UFC could promote. Realistically, though, Duffee is a great heavyweight prospect the UFC wants to nurture, and throwing him into this kind of fight is the exact opposite of nurting a young prospect.

James Toney: 100-1
Silva wants to test himself against a boxer, Toney wants to test himself in the UFC and White wants to put Toney in the Octagon with an opponent who will give him a serious beating. But there's no chance the UFC gives Toney the kind of money he'd demand for a bout in which he'd surely be humiliated.

UPDATE: Maia is the pick