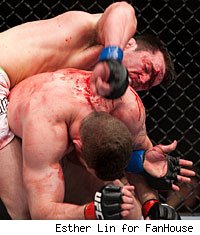 According to UFC President Dana White, Chael Sonnen is now the UFC's No. 1 middleweight contender, thanks to his UFC 109 win over Nate Marquardt.

It's hard to envision Sonnen giving Anderson Silva much of a fight, but then again it's hard to envision anyone at 185 pounds giving Anderson Silva much of a fight. And since Sonnen's record is now 24-10-1, and since Sonnen has now dominated three very good fighters -- Marquardt, Yushin Okami and Dan Miller -- in his last three fights, it's hard to argue that Sonnen should be next in line in the UFC.

See how Sonnen and the rest of the middleweight division stack up in our latest rankings of the top 10 middleweights in MMA.

1. Anderson Silva (1): The UFC middleweight champion had his title defense against Vitor Belfort in April called off. Will he fight Sonnen instead? Silva seems to want fights against bigger names and bigger challenges, and that may necessitate a move up to light heavyweight -- or even heavyweight.

3. Vitor Belfort (4): No word yet on how soon he'll be able to return from shoulder surgery.

4. Jake Shields (5): The champ will be the underdog when he takes on Henderson.

5. Chael Sonnen (7): Sonnen has won some impressive decisions, but now he needs to start finishing fights -- something he hasn't done since TKO'ing a little-known opponent named Kyacey Uscola in 2007.

6. Demian Maia (6): It might seem unfair to have Maia below Sonnen after Maia needed only half a round to submit Sonnen last year. But Sonnen has looked much more impressive than Maia since then.

8. Robbie Lawler (NR): His comeback win over Melvin Manhoef was thrilling, and his presence gives Strikeforce a middleweight division with more depth than just the Henderson-Shields fight.

9. Yushin Okami (9): The UFC just keeps on burying Okami; his next fight will be against Lucio Linhares on the non-televised portion of the UFC Fight Night 21 card.

10. Mamed Khalidov (10): His rematch with Jorge Santiago at Sengoku 12 in March should be outstanding.