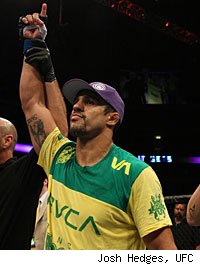 Vitor Belfort has suffered a shoulder injury that will prevent him from fighting Anderson Silva for the UFC middleweight title at UFC 112.

There's no word yet on whether Silva will remain on the April 10 UFC 112 card from Abu Dhabi against another opponent, or if the fight will be pushed back to a later date.