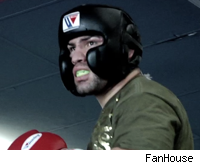 Cain Velasquez is considered by most to be one of the 10 best heavyweights in MMA, and while the undefeated Velasquez continues to improve every time he steps inside the Octagon, he has never faced anyone quite like Antonio Rodrigo Nogueira. The 27-year-old Velasquez will headline UFC 110 against "Big Nog," and a win against the former PRIDE and interim UFC heavyweight champion will surely put him one step closer to fighting for a title.

MMA Fighting's E. Casey Leydon spent some time with Velasquez and his training partners at the American Kickboxing Academy in San Jose, Calif., and found out what the former Arizona State University wrestling star is doing to prepare for the toughest fight of his young career. Check out Velasquez's UFC 110 video journal below.