Michael Bisping: Wanderlei Silva 'Not the Most Difficult Guy to Prepare For' 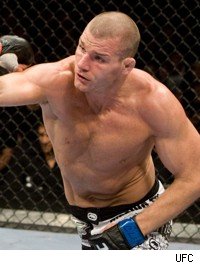 Making sure his body is adjusted to the drastic time change, he'll have been in Australia for nearly three weeks by the time he steps into the cage. He's also gone through his customary grueling camp. But when it comes to readying himself for the legendary brawler Wanderlei Silva, he says that's not necessarily the most challenging part of his preparation.

"To be honest, in some respects, he isn't the most difficult guy to prepare for," Bisping said on a Wednesday conference call. "The striking element and the loopy punches. Outside of that, I think that that's pretty much all he's got to offer. Obviously he has good Muay Thai, he's very experienced and good on the ground and stuff, but he likes to strike and so England with its background in boxing and Thai boxing, we have lots of guys to try to replicate that style."

Bisping (18-2), who was famously knocked out by Dan Henderson at UFC100 before rebounding with a stoppage win of his own against Denis Kang at UFC 105, said he learned a lesson in humility from his July 2009 setback, stemming from his own fallibility.

Though he didn't elaborate on that belief, a clue might come from another comment he made earlier, when he noted that against Henderson, he was so concerned about possible takedowns that he fought on his back foot, ready to defend a possible shoot.

"Wanderlei is a strong puncher, but I'm planning to stand toe-to-toe, meet him in the middle and have him on his back foot," he said.

The brash Brit also has the luxury of having Silva's longtime rival Quinton "Rampage" Jackson in his camp, and he says that's also added to his confidence level. But Jackson aside, he had plenty of help in preparing for Silva's blitzkrieg attacks.

"One thing England isn't short on is lots of brawlers," he said. "We don't have to look too far to find guys who like to swing a lot and just all-out brawl. The gym where I train, Wolfslair, seems to be full of them."