Joey Beltran: I Feel a Little Bad for Rolles Gracie 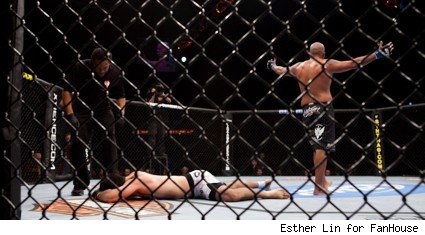 For all the pressure that was put on his opponent Rolles Gracie, Joey Beltran admits he feels a little bad about how Gracie's performance has been received by fans, the media and Gracie's own coach Renzo Gracie, who has described Gracie's debut as "embarrassing."

In the interview below with MMA Fighting, Beltran shares his thoughts on Gracie's performance and talks stepping in on a week's notice to win by TKO last Saturday at UFC 109 in Las Vegas.

Ray Hui: Accepting the fight on seven day's notice, how prepared did you feel coming into your UFC debut?
Joey Beltran: I felt definitely prepared. I had just got done with a serious fighting camp for a five-round fight against Houston Alexander and I got out of that fight with zero damage, so I was literally in the gym the next Monday. Technically, I've been training 10 months for the Rolles fight. That was the mental approach I had. With the Houston fight, nothing really happened to me, at all. I think maybe I got punches like once when he was on his back. I felt very prepared.

What went through your head when he mounted you in the first round?
For a split second I though, "Oh, this is bad." But then I started listening to my corner and just worked to get to the fence, just banking that he hadn't worked on his cage techniques. If you watch the fight, the cage bridge that I use is a very simple (move) -- one of the first things we learn when training to fight in the cage. I stayed calm and I worked my feet, and climbed the fence and it was clockwork. It was cool.

Rolles is catching a lot of flack for the fight, even from his own camp. What did you think of his performance?
Obviously, I know that guy didn't want to fight. I felt bad. I mean, I didn't -- I do feel a little bad for him. Before the fight even happened, he didn't seem like a guy who wants to fight. He doesn't have it in his heart. He's kind of being pushed into it because he's a Gracie. I almost feel bad for the guy because he had so much pressure going into that fight, but it's business. I know I was brought in there to lose so I had to ruin their plans. It is what it is.

What gave you the impression he didn't want to fight?
I don't know. Just with interviews. Just him saying stuff like, "I got into fighting because I wanted to try something new." No, buddy. If you want to compete at this level, you got to have fighting in your heart from day one or else you're going to get hurt real quick.

When you say you were brought in to lose; even though you signed a four-fight deal, is your next fight a must-win situation?
I look at it like every fight is a must-win situation. I've gotten better at it as the years have gone by, but mentally, the weeks before the fight, I'm a nervous wreck. I'm an anxiety attack waiting to happen. I whip myself to a mental frenzy just to get ready for that fight. Every fight for me is a must-win situation. It's more than a fight to me. It's my life. It's how I support my family. This is how I pay the bills, so I gotta win every time.

What weight did you fight Houston Alexander at?
It was at a catchweight of 225.

Can you make it to light heavyweight or do you plan on staying at heavyweight?
I'm a heavyweight fighter. That's where I want to stay. I will hit the weight room and look to get stronger, but definitely my athleticism and cardio, and the pace I push at heavyweight is just sky (high). It'll be a little overwhelming for people.
Do you have a time frame on when you'll be fighting again?
Just tentative dates. We're looking at two months from now. No names have been thrown out, but I'm eager to get out there and I exited this fight with zero damage. So I'm right back in the gym already, and just looking to improve and come out and put on a better showing and a little more entertaining fight this time.