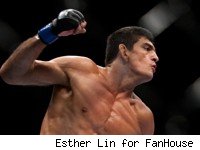 Paulo Thiago is better than anyone thought he was.

When Thiago first signed with the UFC, his 10-0 record looked impressive, but no one gave him much of a chance against his first opponent, Josh Koscheck. And even after Thiago won that fight with a first-round TKO, most people thought he benefited from a lucky punch and a quick stoppage.

(Editor's note: The individual fighter's ranking the last time we did welterweights are in parentheses)

1. Georges St Pierre (1): The UFC is rapidly running out of credible opponents for the undisputed king of the welterweights. Dan Hardy probably won't give him much of a challenge at UFC 111.

2. Jon Fitch (2): At 11-1 inside the Octagon, Fitch has one of the most impressive records in UFC history. But he hasn't finished anyone in almost three years, and GSP dominated him.

4. Nick Diaz (4): The Strikeforce welterweight champ is a great fighter in need of some good opponents.

5. Paulo Thiago (9): Can make a strong case that he deserves the next title shot.

6. Josh Koscheck (5): He'll have his hands full with Paul Daley in May, but if he fights a smart fight his superior wrestling will give him the win.

8. Matt Hughes (7): After a long layoff, he'll get back into the Octagon against Renzo Gracie in April.