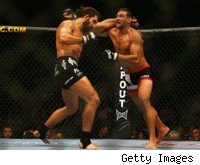 Still without a deal for a mixed marital arts fight, former UFC heavyweight champion Andrei Arlovski is turning his attention towards a charity boxing fight on Feb. 27 in Miami, Fla.

"I am honored to step into the ring with a great fighter like Fres Oquendo," Arlovski said Wednesday in a statement. "This is going to be an exciting exhibition match but we already know the winner: the children we are helping."

Arlovski, who trains with Freddie Roach, planned to box last year, but a fight never came to fruition due to injury and a role in a Universal Soldier film.

On the MMA front, Arlovski allegedly received an offer to fight Alistair Overeem at Dynamite!! 2009 on New Year's Eve, but DREAM replaced him with Kazuyuki Fujita for a reason unknown to Arlovski's camp.