MMA Top 10 Light Heavyweights: Is Randy Couture in the Mix? 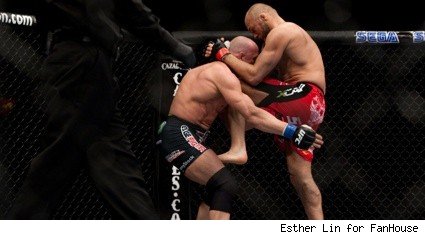 After Randy Couture beat Mark Coleman at UFC 109, UFC President Dana White said Couture is one of the top five or six light heavyweights in the world.

But while Couture looked good against Coleman, he's going to have to win at least one more fight at light heavyweight before he makes my Top 10. The updated rankings of the Top 10 light heavyweights in MMA are below.

(Editor's note: The individual fighter's ranking the last time we did light heavyweights are in parentheses)

1. Lyoto Machida (1): The champion doesn't have the aura of invincibility that he had before Shogun Rua gave him a tough five rounds, but he's still tops at the weight class.

2. Anderson Silva (2): He's the UFC's middleweight champ, but even at light heavyweight -- where he destroyed Forrest Griffin in his last fight -- no one other than Machida is better.

3. Mauricio "Shogun" Rua (3): Most fans thought he beat Machida, but all three judges thought otherwise. He'll have his chance to take things out of the judges' hands in May.

4. Rashad Evans (4): The former champ might get another chance at the title if he beats Rampage Jackson in May.

5. Forrest Griffin (5): May will be the big month for the light heavyweight division, as Griffin has a tough fight with Antonio Rogerio Nogueira.

6. Quinton "Rampage" Jackson (6): The box-office success (or lack thereof) of the upcoming A-Team movie may determine whether Rampage is completely dedicated to MMA, or whether he's an actor first and a fighter second. If he's anything less than completely focused on fighting, he'll lose to Evans.

7. Dan Henderson (7): For now he'll fight at middleweight, taking on Jake Shields for the Strikeforce belt in April.

9. Thiago Silva (9): Other than Machida and Evans, he's dominated everyone he's fought.

10. Antonio Rogerio Nogueira (10): Could move into title contention if he beats Griffin.