Matt Major Signs with Bellator, Compares Self to Van Damme, Segal and Lee 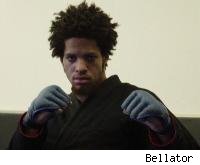 Another day, another signing for the busy Bellator promotion, which announced the addition of Matt Major to their middleweight tournament field.

Though this will be Major's first time fighting for a major organization, he gained some attention in the MMA world in August 2008 when he beat UFC veteran Shonie Carter in a decision.

A part-time fashion designer, Major is known to be one of MMA's characters who isn't afraid to say outrageous things.

"All I ever wanted to do was be the next Jean Claude Van Damme, the next Steven Segal, the next Bruce Lee. And now I'm better than all of them," he said in a Bellator release. "I knew since I was a little kid that I was going to be a great fighter."

Other announced middleweights for the tournament field include Eric Schambari and Bryan Baker. Hector Lombard was the season one champion, and will eventually fight the tournament winner in the finals.

The season kicks off on April 8 at the Seminole Hard Rock Hotel & Casino in Hollywood, Florida.