JZ Cavalcante Making Sure He Is 100% Healthy Before Returning 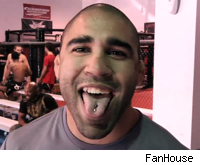 It wasn't too long ago that JZ Cavalcante was considered one of the best 155-pounders in the world. But after losing two fights in a row and dealing with multiple knee injuries, the Brazilian lightweight has fallen out of most top-10 rankings.

Cavalcante hasn't competed since May 2009, and when MMA Fighting caught up with him recently at the American Top Team gym in Coconut Creek, Fla., he said he expects to return to action in April or May, which is when he is sure to be 100% healthy.

Cavalcante also talked about wanting to fight in the United States and how he is able to fight with not one, but two, tongue rings. Check out the video interview below.