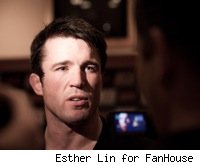 Just days ago, Chael Sonnen was ripping Anderson Silva for wearing earrings and pink shirts, and "pretending that he doesn't speak English." He was calling him "a bum" and saying he'd really rip into the champ after he beat Nate Marquardt after UFC 109.

The rest of us couldn't help but ask if the guy was crazy. Not only was he trash-talking the man who many consider the pound-for-pound MMA king (Sonnen also takes exception to that), but he also basically promised a win over Marquardt?

Ridiculous, some thought. But the man with the golden mouth has the last word. He's had plenty to say about Silva, and now -- as the sudden and surprising No. 1 contender for the belt that Silva has owned since 2006 -- he'll have plenty of time to think about possibly fighting him.

The UFC middleweight who uses words as a weapon as often as he uses wrestling and ground and pound vaulted to the challenger-in-waiting spot in the UFC middleweight division by grinding down heavily favored Nate Marquardt en route to a lopsided decision win at UFC 109.

That means that if Silva can get past his next scheduled opponent in Vitor Belfort at UFC 112 in April, he will meet one of the only men who's ever badmouthed him in public. A few months ago, no one would have had any interest in that matchup, but what a difference a couple wins and a few choice words can make.

"Chael came out of nowhere," UFC President Dana White admitted in the UFC 109 post-fight press conference. "He was in the WEC and came over here and has blown some people away. We have Vitor and Anderson which is interesting and exciting, and now there's another guy who is waiting in line who is interesting and exciting. He brings something different into the fight that a lot of people are going to look at. If he gets this thing to the ground, it'll be an interesting fight. He popped out of nowhere, and it's a beautiful thing."

Sonnen's rise through the UFC was as quick as it was shocking. At the time of his return, he seemed more suited for the role of journeyman than champion.

When he began his second stint in the UFC (he was 0-2 during his first run during 2005-'06), the Team Quest fighter had a solid but unspectacular overall record of 22-9-1. Though he was known for his strong wrestling base (he was a Division I collegiate All-American at the University of Oregon), Sonnen had one major issue, and that was his submission defense.

In fact, at the time of his return, seven of his nine losses had come via submission, including a WEC title match loss to Paulo Filho in 2007. The hole in his game just wouldn't seem to close.

In his first fight back in the UFC, he was again forced to tap, this time to jiu-jitsu wiz Demian Maia, who pulled guard against him and triangle choked him in just 2:37.

After losing the bout in his UFC restart, it seemed clear he had a long, uphill climb ahead of him. But putting together the best streak of his career, he defeated Dan Miller, Yushin Okami, and then Marquardt to put him on the cusp of a title for a second time.

The last fight of the three wasn't easy. Marquardt hurt him with an elbow that sliced his forehead and caused major blood loss throughout the bout.

"I was scared it would stop the fight," Sonnen later admitted.

But he fought through it with a tenacity and doggedness that we haven't always seen in him. Marquardt is a game fighter and way too well-rounded to truly dominate. It's been a while since Marquardt lost like this. Anderson Silva stopped him in 2007, but Sonnen beat him up. There is a difference.

"I don't think I should've lost that fight," a bewildered Marquardt said afterward before apologizing to his fans.

It was so clear that Marquardt was beaten that late in the fight, when he finally had top position on Sonnen after about 14 minutes, 30 seconds of being controlled on his back, Marquardt pretended as though he was going to knee Sonnen in the head, an illegal move that might have led to a disqualification.

"That was kind of a joke," he said. "There was nothing else I could do."

It seems improbable to think that Sonnen could be so close to holding UFC gold, but after seeing him stifle the capable Marquardt, it doesn't seem impossible to believe that he could take down either Silva or Belfort and put an offensive fighter on the defensive.

Just days ago he was ripping Silva, whose camp fired back by saying they had their money on Marquardt. Don't expect the words between the camps to die down anytime soon. In fact, Sonnen promised beforehand that if he won, he would "sink his teeth" into "the Spider."

Chael Sonnen knows how to sell a fight. The only difference is, this time we might get a payoff. Sonnen lived up to his end of the bargain; now it's up to Silva.

"I don't want to be an also-ran," Sonnen said. "I want to be king of the mountain, otherwise I'll move on in life. I think I can beat any man."

He may talk a lot, but now, people may be starting to believe him.