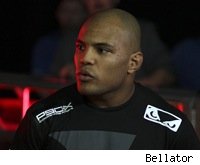 Bellator announced Monday that Reis is back as the sixth confirmed participant in the eight-man featherweight tournament, a tournament whose winner will fight Soto for Bellator's featherweight title in Season 3.

"More than anything, I want to get my rematch against Joe Soto," Reis said in a statement. "I'm a lot more mature now as a fighter and an athlete ... a lot more prepared than I was before."

"Wilson's a very talented fighter at 145 and was just one judge's decision away from advancing to the featherweight championship fight last season," Bellator promoter Bjorn Rebney said in a statement. "The Soto-Reis fight was one of the best fights in a season of great fights and the chance to potentially see a rematch between these two would be awesome. But first. Wilson has to get through a gauntlet of great fighters at 145. Plain and simple with Wilson's addition, our featherweight tournament is stacked."

It must be said that we're going to see some phenomenal fights in the featherweight division in the coming months. With Bellator's tournament, a Dream featherweight title bout between Bibiano Fernandes and Joachim Hansen, and Jose Aldo vs. Urijah Faber and Mike Brown vs. Manny Gamburyan in the April WEC pay-per-view, fans of featherweight fights are going to be spoiled in 2010.