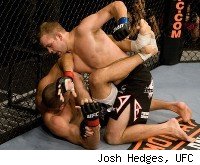 A middleweight bout between two fighters in need of a win was added to UFC 114 pitting Ryan Jensen against Jesse Forbes.

Bout agreements have been signed for the fight, according to a UFC source.

Both fighters are in their second stints with the UFC, and are coming off losses.

The 32-year-old Jensen (14-6) lost just over a month ago when he suffered a first-round defeat at the hands of Mark Munoz. Jensen had won his previous fight, a submission win over Steve Steinbeiss, but is 1-2 in his last three UFC fights.

The 25-year-old Forbes (11-4) began his UFC career on season three of The Ultimate Fighter, but he lost his first official octagon match to Matt Hamill in 2006 and was cut. After going 10-2 in smaller promotions, he was invited back to the UFC, but lost in his return at last month's Fight Night 20 event in a tight split decision to Nick Catone.

UFC 114 will take place on May 29 at the Mandalay Bay Events Center in Las Vegas. The show's main event is expected to be the long-awaited grudge match between Quinton "Rampage" Jackson and Rashad Evans.