Joe Stevenson Prepares to Fight an Aussie Down Under 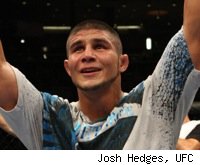 When Joe "Daddy" Stevenson steps into the Octagon against George Sotiropoulos at UFC 110, he'll likely hear the loudest boos of the night. UFC 110 is, after all, the UFC's first card in Australia, and Sotiropoulos is the UFC's top Australian fighter.

But Stevenson says he's fine with that.

"Fighting an Australian in Sydney, obviously I don't expect to get the biggest cheers of the night," Stevenson said. "But, hey, the fans have to do what that can do to help their guy George. That's what home fans are supposed to do and I respect that. Is it tough getting booed? I've been booed before, and I've won over crowds that started off booing me before too. I am looking forward to doing what Rocky did when he went to Russia in Rocky 4 to fight Drago. The Russians all hated him when he walked in but he and Drago gave them so great a fight at the end they were chanting 'Rocky, Rocky, Rocky'. I am looking forward to hearing some "Joe Daddy, Joe Daddy, Joe Daddy" chants towards the end of the fight with George because I am expecting him to give me the fight of his life."

Stevenson, who said he's "looking for a dominating win" against Sotiropoulos, said he's improved by leaps and bounds since starting to train with his new coach, Greg Jackson.

"When you lose, you have to grow," Stevenson said. "If I wanted to go forward, I had to make changes and going with Greg Jackson's camp was something I needed to do if I wanted to go back to winning."

Stevenson is currently on a two-fight winning streak, having defeated Nate Diaz in June and Spencer Fisher in October, and he said he thinks that if he wins a couple more big fights, he might get another shot at UFC lightweight champion B.J. Penn. Stevenson got a shot at Penn once before, at UFC 80 two years ago, and it didn't go well, with Penn bloodying Stevenson and beating him with a second-round rear-naked choke.

"I want to keep on winning, and winning big, so the fans are like 'Give Joe Daddy his second title shot already,'" Stevenson said. "I was asked by BJ if I wanted to train with him for this fight but, as great as would be, I had to say no because I think I am going to be fighting him again at the end of the year."

But Stevenson knows he's got a big task ahead of him before anyone will be talking about him as the No. 1 lightweight contender.

"Frankie Edgar has the next title shot, but Gray Maynard is there, too, and the whole division is stacked," Stevenson said. "I need to keep on looking good and making sure the UFC notices me every time I fight."

Sotiropoulos has won all four of his fights since signing with the UFC in 2007, and none of his UFC opponents have even gotten into the third round with him. But Stevenson said he views himself as a step up in competition for Sotiropoulos, and he said he's accustomed to fighting opponents with names like Penn and Sanchez and Florian and Diaz, he doesn't want to lose to an opponent named Sotiropoulos.

"The worst thing about losing to George would be losing to a guy with that weird name," Stevenson said. "People would be like 'Who did Joe Daddy lose to? George Soter-something?' and it would be as if no one had ever heard of this guy because no one can pronounce his full name. ... Everyone who knows MMA knows George has serious skills and is an up and comer, but to casual fans it would be like "George Who? George What? You lost to someone and you don't even know his name?"

Ultimately, Stevenson said, he's excited about the opportunities that a fight with Sotiropoulos provides him -- and he's excited to spend some extra time in Australia. Stevenson said that Greg Jackson was actually friends with the late Crocodile Hunter Steve Irwin, who was a big MMA fan, and that he and Jackson have visited Irwin's zoo together. Stevenson is also planning a vacation with his wife and kids after the fight, but first he's got business to attend to.

"I need a dominant performance," Stevenson said, "to start breaking out from the pack again."