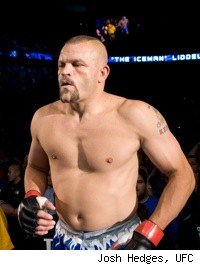 FORT LAUDERDALE, Fla. -- When former UFC light heavyweight champion Chuck Liddell lost to Shogun Rua at UFC 97 in April of 2009, it was supposed to be the end of his career.

At least, that's what UFC President Dana White said at the time. But Liddell never wanted the loss to Shogun to be his last time inside the Octagon, and we now know that it won't be: Liddell will square off with Tito Ortiz for a third time this year, most likely at UFC 115 in June. And in a conversation with MMAFighting.com during Super Bowl week, Liddell said he can't wait to get back into the Octagon.

Liddell appeared to be in good shape physically, and he seemed sharp and in good spirits mentally. And he said he'll be in great shape by the time he fights Ortiz, whom he's already beaten twice, at UFC 47 and at UFC 66.

"I'm just getting back into camp right now, getting ready for that fight still a few months off," Liddell said. "I'm strong and healthy and I'm just excited to be getting another chance to fight."

In the prime of his career Liddell would fight two or three times a year, and he said his long layoff from fighting since that loss to Shogun 10 months ago has been difficult. But he also said it's been useful: According to Liddell, he's forced himself to approach MMA like a beginner, un-learn some bad habits and re-learn the correct way to fight.

"For me the most important thing I need to do is just getting back to basics," Liddell said. "There's some basic problems with my stand-up that I wasn't addressing, and that cost me. I need to make sure I'm not as open as I've been, leaving myself exposed the way I did against Shogun and Rashad (Evans) and Rampage (Jackson)."

Liddell said that from 2004 to 2006, he was fighting opponents who had deficiencies in the stand-up game themselves, and as a result he was able to win seven straight fights (two each against Ortiz and Randy Couture, and Vernon White, Jeremy Horn and Renato "Babalu" Sobral) even though he was making mistakes at times.

That seven-fight winning streak was surrounded by two losses to Jackson, one at Pride Final Conflict 2003 and one at UFC 71 in 2007. Both of those losses demonstrated that a hard-punching opponent could exploit Liddell's tendency to leave his chin exposed, and Liddell says now that he wasn't quick enough to correct that flaw in his game.

"I got away with things over the years and then I got caught, and now I need to go into fights knowing I can't get away with the same things I used to," Liddell said.

Liddell says he'll be a better fighter when he steps into the Octagon with Ortiz, and he's expecting to win again.