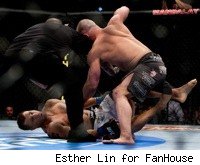 The most important fight on the card -- that saw the underdog Sonnen clinch a middleweight title shot -- was declared the Fight of the Night. It was three rounds of Sonnen taking Marquardt down at ease and ground and pounding the former King of Pancrase with elbows and punches. Marquardt did, however, manage to attempt two guillotine chokes off Sonnen takedowns, but Sonnen would work his way to escape both times. Sonnen won on all three scorecards 30-27.

Although Randy Couture's rear-naked choke over Mark Coleman was called the Submission of the Night on the pay-per-view, Thiago was announced as the award winner during the post-fight conference. Thiago rendered Mike Swick unconscious with a D'arce choke after dropping the AKA welterweight with a left hook.

The best grappler on the card, Demian Maia, didn't end up scoring a submission, winning his first fight without forcing a tapout. Instead, Maia tested his standup against fellow black belt Dan Miller.

"He didn't want to fight on the ground," Maia said. "When i put him down, he tried to stand up right way. I said, 'Okay, let's fight standup.'"

The Knockout of the Night went to Serra for reeling off another highlight finish by dropping former title contender Frank Trigg with an overhand right and blasting him with three more rights.