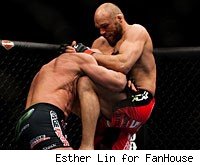 Randy Couture is not done just yet.

He may be 46 years old, but the UFC legend refuses to give in to every fighter's toughest opponent: time. The five-time UFC champ won his second straight fight since moving down to the light-heavyweight division, defeating fellow Hall of Famer Mark Coleman by putting him to sleep with a rear-naked choke at 1:09 of round two at UFC 109.

As a 4-to-1 favorite, Couture was expected to dominate the bout, and he did just that, routing Coleman in the first round with punches and strikes from the clinch before finishing him in the second.

The closing sequence began early in the second when Couture took Coleman down near the cage and quickly moved to full mount. Coleman gave up his back and Couture quickly capitalized on the positioning, sinking in a choke to win via submission.

"The guy's tough, real tough," Coleman said. "I don't know what the hell happened. I'm disappointed. i think I can do better. i won't quit. I'll be back."

If anyone stole the spotlight from Couture, it was his former Team Quest teammate Chael Sonnen. A 4-to-1 underdog in his fight against Nate Marquardt, Sonnen pulled off the upset, knocking off the highly favored Nate Marquardt in a No. 1 contenders fight.

Sonnen surprisingly easily controlled Marquardt, overwhelming him with takedowns and ground-and-pound. Sonnen won all three rounds on all three judges' scorecards with his aggressive attack.

Marquardt was able to do little. His best strike of the fight was an elbow from the bottom that caused a gash over Sonnen's eye that bled heavily, and his only real offensive flurry of the fight came in the final seconds after he finally reversed Sonnen's dominant position.

With the win, Sonnen is next in line in the middleweight division after Anderson Silva and Vitor Belfort decide who's king of the weight class at UFC 112.

The end was sudden and thrilling.

Just moments before the finish, Swick seemed to be on the verge of victory after landing a straight right that rocked Thiago backwards. As Thiago reeled, Swick swooped in to follow up. Shockingly, however, it was Thiago who landed the next major blow, flooring Swick with a left hook. Thiago then sunk in the D'arce and Swick went limp instead of tapping.

The loss was the second straight for Swick, who also fell to Dan Hardy in a No. 1 contenders fight at UFC 105. Swick fell to 14-4.

Thiago improved to 13-1. He's now 3-1 in the UFC and has wins over AKA teammates Swick and Josh Koscheck.

In a welterweight bout, former UFC champion Matt Serra returned to the win column in style, knocking out Frank Trigg at 2:23 of round one.

Serra floored Trigg (19-8) with a straight right hand and followed up with three unanswered punches. Trigg's arms fell to his side and ref Josh Rosenthal jumped in to rescue Trigg.

Coming off a brutal knockout loss at the hands of Marquardt, Demian Maia rebounded by defeating Dan Miller by unanimous decision.

Though Maia and Miller are both best known for their grappling prowess, most of their fight was a standup affair.

Through most of the exchanges, Maia outlanded Miller, but despite scoring points, he was never able to hurt him badly. In the third round, Maia showed his grappling pedigree by putting Miller on the ground and controlling the action. Miller defended well, but Maia scored with punches en route to the decision.

"I came here to show that I can do standup," said Maia, who improved to 12-1 with the win. "I want to fight for the title, so I have to have standup. My boxing is not the best but I can improve."

Miller fell to 11-3 with one no contest with the loss.

In preliminary fights broadcast on Spike prior to the pay-per-view, Melvin Guillard defeated Ronny Torres and Mac Danzig earned a decision over Justin Buchholz.

Guillard, working under new trainer Greg Jackson for the first time, looked improved, particularly on the ground as he stifled the submission specialist Torres.

On the feet, Guillard outclassed and outpowered Torres en route to the decision.

Danzig, meanwhile, desperatly needed a win, and got it. On a three-fight losing streak, Danzig knew he was on the cusp of being cut and might be on his way out of the UFC with another loss.

Saying he didn't belong in the UFC if he couldn't beat Buccholz, he answered the challenge, though Buccholz put up a good fight, taking him the distance.