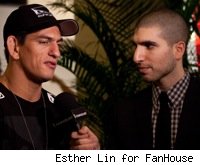 LAS VEGAS -- Paulo Thiago won't have much time to celebrate his UFC 109 victory over Mike Swick, because the Brazilian welterweight told MMA Fighting following the victory that he will report back to his other job as a member of BOPE, which is Portuguese for Special Police Operations Battalion, Monday morning.

Thiago also discussed his evolution as an MMA fighter since his UFC debut last year and the lack of respect he sometimes receives by the oddsmakers. Check out the video interview.