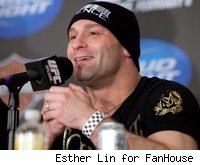 LAS VEGAS -- Matt Serra hadn't tasted victory since his welterweight title victory over Georges St-Pierre in April 2007, but on Saturday night at UFC 109, "The Terror" got back on the winning track and instantly became a contender once again. Serra defeated Frank Trigg via first-round TKO victory.

MMA Fighting caught up with Serra following the victory and talked about how he pulled off the win, where he goes from here and the impending opening of his new gym on Long Island.