Five Things We Learned From UFC 109 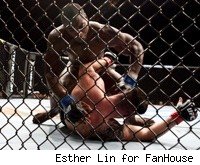 I'm not sure what more we can learn from Randy Couture at this stage of his career. He is what he is, and that's pretty amazing. Even if you're the cynical type that's not impressed with a victory over a 45-year-old opponent, you have to give Couture a tip of the cap for competing three times in the last seven months. That's hard to do when you're 26, let alone 46.

Couture aside, here are my takeaways from UFC 109.

1) Who's driving the Phil Davis bandwagon?
Chalk up another exciting contender to world's light-heavyweight ranks.

It's always dangerous to draw conclusions from one fight, but the former Division I wrestling champion completely dominated a very good fighter in Brian Stann.

Not surprisingly, Davis is quite dependent on his takedowns, but he's only two years removed from his collegiate wrestling days, so that's to be expected. But he's spent time training with top strikers like Brandon Vera and the staff at American Kickboxing Academy. From the size of his legs, he looks like he can generate a ton of power as his technique improves (the kinetic chain of a punch starts from the legs).

If his standup gets anywhere close to the level of his wrestling, look out world.

2) Paulo Thiago is no fluke
When Thiago beat Josh Koscheck at UFC 95 with a seldom seen in MMA uppercut knockout, many people thought it was a lucky punch. You would think some of the doubters would have been silenced when he went the distance with the ever-tough Jon Fitch at UFC 100, but now there should be no question about it.

Thiago hurt Mike Swick and then finished him in the blink of an eye. He showed great finishing instinct, and after beating his second top 10 opponent, don't be surprised to see Thiago crack the welterweight top 10 rankings himself.

3) Chael Sonnen backs up his words
Two years ago, Sonnen was more on his way to journeyman than champion, but yet here he is now one win away from having UFC gold strapped around his waist.

Who knows where this recent surge came from? Sonnen was always a solid fighter, but in his first run in the UFC in 2005-'06, he was 0-2, and he'd never before had a winning streak longer than five fights in his career.

His transformation seemed to come with his new outspoken attitude. Much of what Sonnen says can probably be taken with a grain of salt, but at the same time, he's put a lot more pressure on himself to come through in the cage after drawing so much attention. He's talked the talk, but he's walked the walk, too. His effort against Nate Marquardt was downright inspired. Well done.

4) You can't please everybody
Though Mark Coleman is beloved for his longevity, he hasn't always won fans over with his grinding style (most MMA watchers prefer standup over grappling). Against Randy Couture, Coleman basically abandoned his usual wrestling attack in favor of a standup fight.

It eventually backfired as Couture got the better of the striking, and eventually he dragged Coleman down to the mat and choked him out. People questioned his strategy, but I understand it.

It's quite possible he realized that any wrestling battle would end in a stalemate, and given his stamina problems in the past, all the effort would leave him with negative returns. He did have a power advantage against Couture, and possibly felt the chances of knocking him down were better than the chances of taking him down. He did rock Couture once in the fight, so he might have had the right idea but simply couldn't execute it. At 45, don't blame him for going for broke.

5) Melvin Guillard might have turned the corner
In the past, we've seen Guillard look lost on the ground. Most of his losses have come via submission, and before the fight, I thought Ronnys Torres had a very good chance of adding another tapout to his ledger.

But this time, Guillard looked like a different fighter on the ground. Though he found himself in a few dangerous positions against the black belt, he never came close to being submitted.

Guillard recently switched camps to train with the vaunted Greg Jackson team, and maybe it would be making too much to credit Jackson with the sudden improvement, but sometimes things just click for a fighter, and maybe Guillard (who is still only 26), has figured things out.