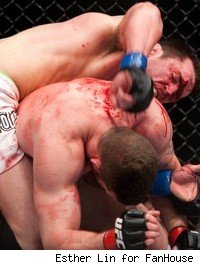 Chael Sonnen came into UFC 109 as a sizeable underdog, but he dominated favored veteran Nate Marquardt en route to a unanimous decision victory in the event's co-main event.

With the win, Sonnen gets a crack at the middleweight championship, to be decided when Anderson Silva and Vitor Belfort face off later this year.

"I don't want to be an also-ran," Sonnen said after the fight. "I want to be king of the mountain, otherwise I'll move on in life. I think I can beat any man."

Sonnen controlled the action from bell to bell, though Marquardt had his moments, slicing Sonnen's forehead with an elbow, and raining down punches in the final seconds of the bout. It was too little too late, however, as Sonnen repeatedly took Marquardt down and hammered him with ground and pound throughout the duration of the 15-minute bout.

"I just executed my gameplan the wrong way," Marquardt said. "I'm sorry to the fans and my teammates. I dont think I should've lost that fight. I let him get takedowns and that was key."

Sonnen, who's won three in a row in the octagon, improved to 25-10, while Marquardt fell to 29-9-2 in having a three-fight win streak snapped.