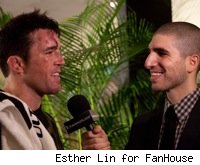 LAS VEGAS -- When Chael Sonnen came to the UFC from WEC in 2009, he told everyone who would listen that he would be fighting for a middleweight title shot sooner rather than later. Most scoffed at his bold prediction, but after his dominant unanimous decision victory over Nate Marquardt at UFC 109, Sonnen is now the No. 1 185-pound contender.

MMA Fighting spoke to Sonnen at the post-fight press conference about his stunning climb up the middleweight title, his current health situation and why he thinks Vitor Belfort will defeat Anderson Silva at UFC 112. Check out the video interview below.