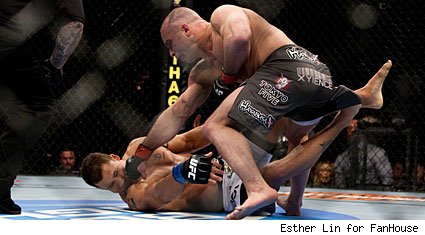 Matt Serra knocked Frank Trigg cold with a brutal combination of punches in the first round of their fight Saturday night at UFC 109, giving Serra his first win since his shocking upset of Georges St. Pierre in 2007.

It was a fight fought completely on the feet, with Trigg and Serra exchanging punches for a couple of minutes before Serra landed a hard overhand right that leveled Trigg, and then knocking him out with a couple more punches on the ground. The referee stepped in to save Trigg after Trigg was already out.

"I'm very happy," Serra said. "I knew he was worried about the right. I've been working a lot on my left, but I'll take the right."

Although the two talked trash leading up to their fight, Serra said afterward that he has a lot of respect for Trigg. But while Trigg is worthy of respect, the reality is that Trigg's last win in the UFC was against Renato Verissimo at UFC 50 in 2004. It's possible that Trigg is done in the UFC.

With the win, Serra improves his professional MMA record to 10-6. Trigg's record falls to 19-8.