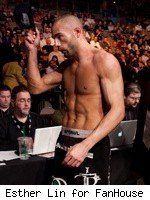 The end came suddenly. Seconds before the fight-ending submission, Swick rocked Thiago with a straight right that sent Thiago backwards. As Swick moved forward to capitalize on the momentum, Thiago answered with a powerful left hook that put Swick on the canvas. Thiago then sunk in the D'arce and Swick went limp instead of tapping.

The loss was the second straight for Swick, who also lost to Dan Hardy in a No. 1 contenders fight at UFC 105. Swick fell to 14-4.

Thiago improved to 13-1. He's now 3-1 in the UFC and has wins over AKA teammates Swick and Josh Koscheck.

The first five mintues of the bout was all standup, and very close, but Swick might have stolen away the round with a takedown inside the final 30 seconds.