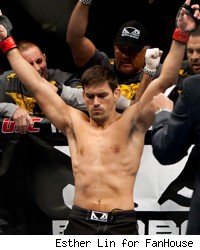 After tasting defeat for the first time in his career last August, the Sao Paulo-based Demian Maia made adjustments to his camp, training with some more of Brazil's best.

For starters, after nearly seven years without a jiu-jitsu coach, Maia brought on Wagner Motta, an old friend from his days with Fabio Gurgel. A little guidance is beneficial even for someone at the top of the submission game.

"When I was by myself I was pushing myself hard but I was doing the same thing," Maia told MMA Fighting. "The same kind of training, just keeping my level. Now he brings new stuff and new kind of training methods that help me a lot in my jiu-jitsu."

Maia continues to train with his usual camp in Sao Paulo, but he also made a trip to Salvador, Bahia, Brazil to work with the Nogueira brothers. Maia trained briefly with the Nogueira brothers around 2001 or 2002, but this time he spent a month working with Team Nogueira, mostly with Nogueira's boxing coach Luiz Dorea and Junior Dos Santos. The option had always been available, but it wasn't one Maia was ready to take -- that was until his loss to Nate Marquardt at UFC 102.

"I've known Antonio Rodrigo Nogueira for a long time and I've always wanted to train with his guys, but the problem before was that if I won the last fight, I was probably going to fight Anderson Silva," Maia said. "Rodrigo is a big friend of Anderson and trains with Anderson sometimes so I didn't want to put Rodrigo in a bad situation. Cause I know he likes me and he likes Anderson and it would have been a weird situation for him."

At UFC 109, Maia will look to bounce back from his loss to Marquardt against new black belt Dan Miller, who has never been finished in a fight.

"I've watched some of his fights," Maia said. "He's not a guy who's afraid to go to different kinds of submissions. Good guillotine. Good leglocks. He's tough in jiu-jitsu. He's not an easy guy. You need be aware all the time when you fight him. Plus his standup is good too."

Maia and Miller will keep an eye on the evening's co-headliner, a title eliminator between Marquardt and Chael Sonnen. Maia holds a win over Sonnen and it'll probably help his title shot campaign if Sonnen beats Marquardt.

"Yeah, it's always better for me," Maia said with a laugh. "I wish both good luck. Both are great fighters. I think nowadays more complete but Chael has a game that's hard to beat. He's hard to put down and he puts down guys very well and he's hard to submit. It's a tough fight for Nate. It's an interesting fight to watch."