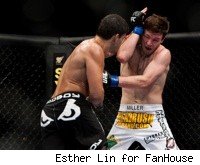 In a fight featuring two middleweight grappling specialists, the fight was a standup affair through most of the bout. But one fight after being knocked out by Nate Marquardt, Maia looked much improved in his striking, outlanding Miller throughout.
For most of the first two rounds, Maia outlanded Miller in exchanges, though he never had Miller in any real trouble. The third round became the expected grappling affair, and again Maia took control, dragging Miller to the ground and controlling him for much of the round. Miller, who recently earned his Brazilian jiu-jitsu black belt, was able to defend against the world-class grappler and lasted out the round.

"I came here to show that I can do standup," said Maia, who improved to 12-1with the win. "I want to fight for the title, so I have to have standup. My boxing is not the best but I can improve."

Miller fell to 11-3 with one no contest with the loss.