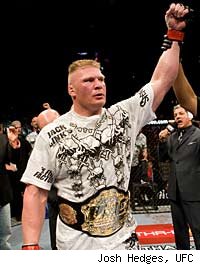 He fought just once in 2009 and won't fight again until the summer, but there's no disputing that Brock Lesnar is the biggest star in the UFC.

The latest piece of evidence: Lesnar has been chosen for the cover of UFC Undisputed 2010.

For the UFC, choosing Lesnar as the cover boy is an affirmative statement that the heavyweight champion, whose last fight was a victory over Frank Mir at UFC 100, is the face of the promotion. All four of the other champions -- Lyoto Machida, Anderson Silva, Georges St. Pierre and B.J. Penn -- are popular fighters who would have been worthy choices to make the cover, but none of them has even close to the drawing power of Lesnar.

The UFC's recent slump in pay-per-view buys was caused by an unlucky string of injuries to several marquee fighters. But none of those injuries were nearly as significant to the promotion's bottom line as the illness that caused Lesnar to pull out of a fight with Shane Carwin in November and to consider retirement before finally making a recovery that Lesnar himself described in January as miraculous.

Now Lesnar is getting ready to come back to fight the winner of the upcoming Mir-Carwin fight, and he's the star of the promotion's video game. It's a reminder of how fortunate the UFC was that after his recent health scare, Lesnar has decided to return to the Octagon.