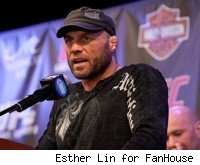 UFC Hall of Famers Randy Couture and Mark Coleman both weighed-in at 205 pounds Friday to make the main event official for Saturday's UFC 109 at the Mandalay Bay Events Center in Las Vegas.

A fight nearly 12 years in the making, Couture and Coleman are both former heavyweight champions in their mid-40s fighting in the light heavyweight division.

The 45-year-old Coleman, despite being a huge underdog according to oddsmakers, said he felt confident he would beat Couture.

"I'm just looking to fight the best and Randy's one of the best of all time," Coleman said. "I have nothing but respect for him but I want a little piece of what he's got. That's it."

Couture, taking his third fight in the past six months, says it's another fight for him to showcase his skills.

"I feel blessed each and every time I get to step back in the ring," Couture said. "It's another chance for me to go out and show the things I've changed and show the ways I've gotten better. I'm a better athlete all the time, and I think Mark Coleman is a great challenge for me, and I'm looking forward to it."

All 20 of the other fighters made weight.