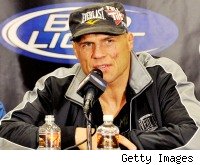 It may be over a decade too late for some, but there will still be countless fans interested in the matchup of legends that will cap off UFC 109.

While there is nothing of major substance at stake in the bout between ex-UFC champs Randy Couture and Mark Coleman, it features two of the most prideful, competitive fighters the mixed martial arts world has ever known, and that alone should make for an intriguing fight.

So how will it go down? Let's take a look.

At a combined age of 91, Couture (46) and Coleman (45) have the oldest combined age of any two combatants in UFC history. They have many wars behind them -- Couture is a five-time UFC champ in two weight classes and also won the UFC 13 heavyweight tournament; Coleman won two UFC one-night tournaments, was the first-ever UFC heavyweight champ and won the 2000 PRIDE Open Weight Grand Prix.

What makes them so hard to count out, however, is their collective competitiveness. Couture's career comebacks are already the stuff of MMA legend, while Coleman was the man who snapped the long winning streak of the seemingly unbeatable Mauricio "Shogun" Rua, fluky as it was.

When it comes to their weapons, both fighters are grounded in the wrestling background that brought about their early success at a time when UFC matches pitted style vs. style and before the sport was known as "mixed martial arts." While Couture is thought of us as the master of "ground and pound," it was really Coleman who innovated the style. In the early days, he used elbows, punches and even headbutts (the unified rules did not yet exist) in a destructive fashion. Although there had been amateur wrestlers around, his success opened the floodgates for the sport as a viable alternative to former collegiate wrestlers who still harbored a competitive itch.

One of those men was Couture, who saw Coleman competing at an early event and soon followed his lead.

In the time since, the two men became legends, but while Coleman largely stuck around his Columbus, Ohio roots and rarely ventured far to train, Couture has continually sought out the best and most advanced training. As one of the founders of Team Quest, and then striking out on his own at Xtreme Couture, "the Natural" has worked with a who's who of MMA fighters and trainers, and as a result, his game has become vastly more well-rounded than Coleman's over the years.

Though Couture cannot be characterized as a slick standup fighter, his striking has become more efficient and effective over the years. Yet he still does most of his damage in two places: in the clinch and on the ground. The former has become a Couture specialty. From his extensive experience in Greco-Roman wrestling, Couture excels at controlling the clinch and using elbows, knees and punches to wear an opponent down or execute a takedown.

Against Coleman, that won't be quite as easy.

Though Coleman has his roots in the freestyle discipline rather than Couture's favored Greco-Roman, he was actually a more decorated amateur wrestler than his rival,winning an NCAA championship, making the 1992 Olympic team, and once beating Couture in a freestyle match.

Largely due to his wrestling pedigree, Coleman dominated right from the get-go. And though he was successful for much of his career simply outmuscling his opponents to the mat and overpowering them on the ground, it may have hurt him in the long run as he didn't evolve the way Couture did.

While Coleman has made an effort in the last year to seek out better trainers and add new weapons to his game, he'll have a tough time matching Couture's repertoire of tricks.

There are a couple of potential X-factors at play for both men. For Coleman, it's his stamina. He's struggled late in fights his last few times out, including his UFC 100 win over Stephan Bonnar. For Couture, it's his ability to take a hit. In each of his last three fights, he's been floored at least once.

Looking at their skillsets, Couture gets the edge in standup and clinchwork, while the wrestling is even. Couture gets an edge in groundwork while Coleman may have a bit more overall strength. Coleman's only true advantage comes in punching power, but it's a significant one to have, as it represents his most likely road to victory.

It's unlikely that Coleman can outwrestle Couture for 15 minutes, so unless Coleman can land a big right hand and finish, expect Couture to use his superior offensive arsenal and gas tank, and outlast Coleman en route to a win.

Either way, both legends deserve their last few turns in the spotlight. Success in sports is fleeting, and these two should be lauded for holding on to it for so long.